Whether you’re into fashion or not, you know Vogue. You might know it as one of the world’s leading fashion magazine, or the magazine run by one iconic Anna Wintour. You might think of Vogue in terms of Met Gala or you think of the magazine as a fashion statement. Folks? This is the story of Vogue.

Vogue was founded in 1892 by Arthur Turnure as a magazine for the New York City’s upper class. In 1909 the magazine was taken over by Condé Nast Publishers, the same company who owns the magazine today. The focus was shifted to women and Vogue became a bi-weekly magazine. During WWI, the british version of Vogue started and was soon followed by Spain, Italy and France. Vogue followed society’s development and went from fashion illustrations to fashion photos in the 1930’s.

In the 1960’s legendary editor-in-chief Diana Vreeland made the magazine more livly and the content a reflection of contemporary art and fashion. In 1988 Anna Wintour became the chief editor and layed the foundation for the magazine as we know it today. Wintour was the first one to launch celebrity fashion succesfully. She also updated the magazine to attract younger people. Vogue is today considered to be one of the leading magazines in the fashion world and Wintour is one of the most influential people within the industry.

Through its long history Vogue has been a platform for designers, fashion houses and models. One of them being early 20th century designer Paul Poiret. Another one being fashion model Twiggy whom in the 1960’s was on several Vogue covers. Another famous feature in Vogue was Le Smoking by YSL in 1975. In pop culture, the fashion magazine and Wintour have served as inspiration for the iconic movie from 2006, The Devil Wears Prada. Vogue also hosts the legendary Met Gala each year, a charity event in honor of fashion. The magazine is also behind Fashion Night Out, a late night fashion event that takes place in cities around the globe every year. 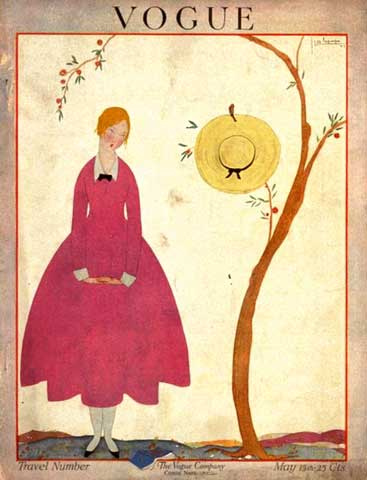 76 thoughts on “The Story Of Vogue”