Folks, it’s Friday so let’s go throwback Thursday instead! This week we’re going back to the late 80s, not the latest late 80s but the limited fashion of the late 1880s (aka we’re glad we’re alive today).

The 19th century was 100 years of cultural, societal and economical development. With the industrial revolution, different movements emerged. The fight for freedom, equality and

rights for all people no matter of social range, ethnicity and gender was important. The century saw a rich evolution in the societal life in particular and an interest for history and how people lived was in center. The interest for history and previous styles in specific was crucial for how women dressed. Even though women gained more rights in society, they’d remain defined by the limited mobility fashion posessed. Notably, the last decade of real conservative fashion (that was true to a whole costume), would be the 1880s. Even though corsets would be used later, they wouldn’t be used to the same extent.

As mentioned, the people of the 19th century had a love for history. This meant that old styles would reappear in the light of a new interpretation. They took (what they thought), was the best of fashion history and made it their own. In center was the silhouette of women, where the 18th century body defying corsets and crinolines were used as corset and bustle. A bustle was a type of framework that gave the right support to the heavy dresses (see

right).  With a puffy bust, a thin waist and an enormous behind, women looked and undoubtedly felt rather uncomfortable. The well-known pigeon busts of the early 20th century emerged from this decade. But unlike the more handable S-silhouette of the Edwardian fashion, this was kind of 18th century extreme, but with the 19th century outtake (making sense, right?!).

Silhouettes were in focus indeed, but that didn’t keep the rest of the clothes simple. No it was high collar pieces with ruffles, it was drapings, patterns and feminine colors. It was common to wear an underskirt with a dress over it, leaving the garment of the

underskirt visible and contrasting. All the fabric that was left hanging behind was often tied up, creating a decorative effect. The industrial revolution made corsets that could be pulled even tighter and with the size of the bustle, women was forced to move in a rather specific way.

If this fashion feels distant to you, and the women who wore it, chokers were popular during this decade(!). And velvet was a popular material, which is the trend of the season this year. So even though it’s almost 140 years apart, we’re not separated by our different fashion but somewhat connected. And hey, not to forget, the aesthetic dress movement developed during this time. Aesthetic dresses were flowy bohemian maxi dresses, and we’re familiar with that, aren’t we? 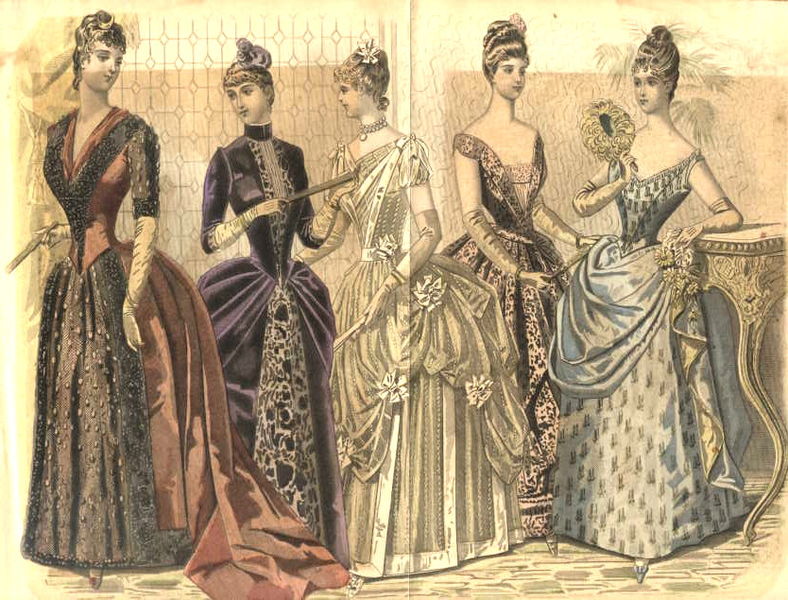 All pictures are public domain and can be found at Wikimedia.