I know the legs might be the true stars of the 1920s fashion, as it was the first time in history women could show their legs publicly in that way, but if we’re gonna get down and nerdy with the details – the neck is an honorable runner up to the title. Why? Well, seldom has a part of the body been framed in so many different ways as the neck was during the Roaring Twenties. Here’s everything you didn’t know you needed to know about the neck accessories in the 1920s fashion! 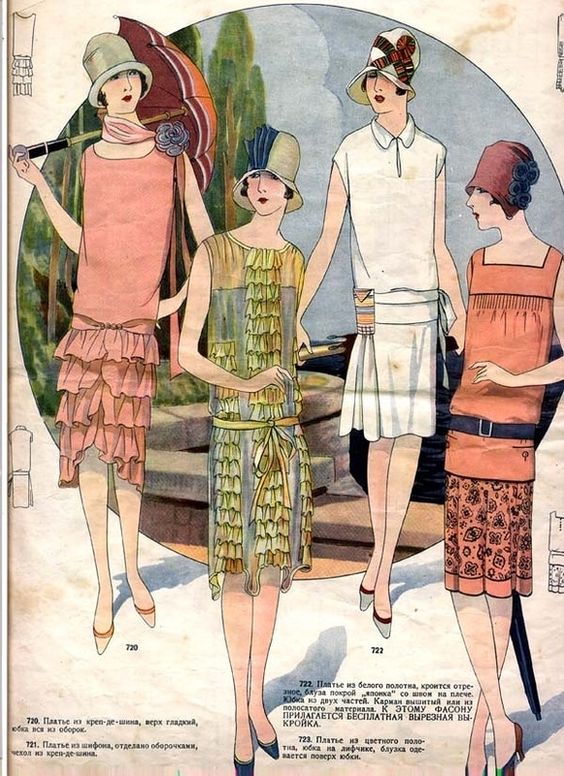 Contrary popular belief, the neck and the décolletage have been two areas of the body that for most part have been fairly displayed through the fashion history. As with everything with fashion, this of course has been something that’s been trendy in periods. But if you take a look at the 18th century fashion, or the 19th century for example, you’ll see that clothes with a low-cut neckline has been quite trendy for most part. In periods though, a more 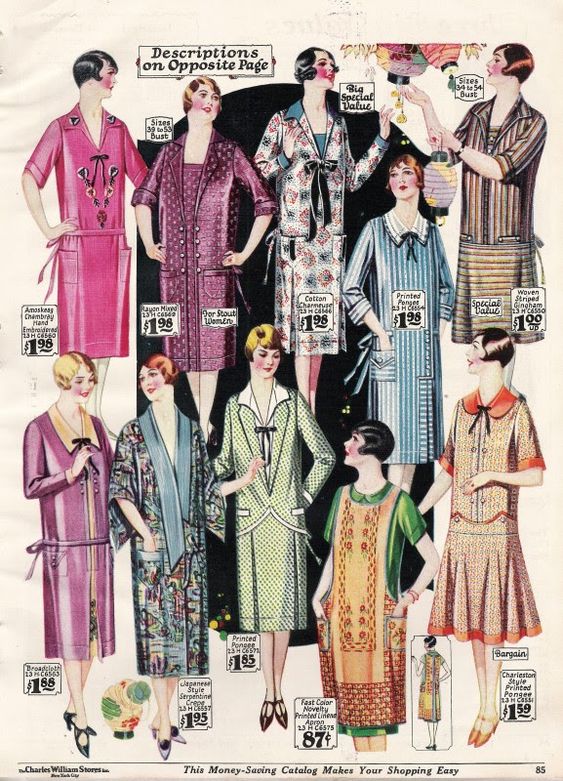 conservative view has dominated the fashion and high necks and collars have been done extensively. This was the case during the late 19th century and the Edwardian era. As talked about before, the early 20th century fashion can in many ways be considered as the last epoque where influences of past fashion dominated heavily. With Paul Poiret, the first World War, feminist movements and Chanel – the fashion gradually became less restrictive and more autonomous.

In the fashion of the 1920s this is perhaps mainly reflected in the length of the skirt, as it has never been shorter in fashion history. The skipping of the corset is another example of this, but also the increased visibility of the neck. Or more specifically, the framing of the neck. This focus on the neck and décolletage, was still far from what’s it been previously in the history, but a distinct contrast from the high collars that were trendy 20 years prior. The framing of one’s neck began in the late 1900s, when the squared neckline, as well as the sharp v-cut, became stylish. Designers started to pay attention to collars, necklaces, bows, lace and other details of embellishment that framed the neckline. This detail of fashion would be popular for decades to come, but is perhaps most interesting during the 1920s with the wide variation of decorations, along with the cuts of the clothes. With the popularity of Art déco, the 1920s fashion centered around geometric cuts, prints and details – a style that matched the neckline well with its diverse looks.

There are mainly four items that enhanced the neckline of the 1920s, sometimes done individually and other times in combination. These four details are the scarf, the necklace, the collar and the cut of fabric. The scarf was simple 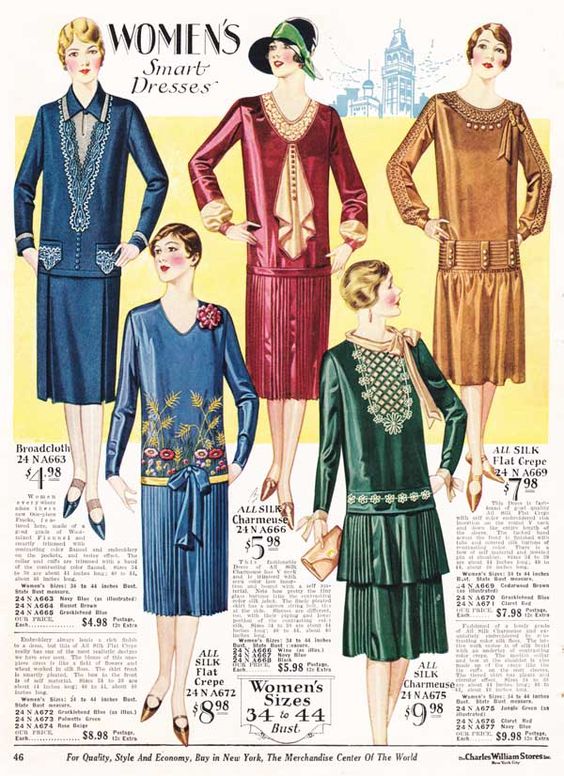 in its design, skinny and long. It was often matching the rest of the outfit in color, or contrasting in some dove shade (brown, dove blue, a soft pea green, blush etc). The scarf was often hanging around the neck freely but tied loosely over the chest. This way of styling the scarf added length to the outfit and reconnected with the sophisticated and loose look of the dresses. The lines of the scarf also enhanced the Art déco look. Bows were a popular alternative to the scarf, also framing the neck.

The necklaces of this era were similar to the scarves, not in style perhaps but the idea of adding length. Long pearl necklaces were common for more elegant looks, but could also be used for more informal occasions. Shorter necklaces were used too, but they were often more modest and discrete if it wasn’t a formal dinner or party – then it could be both embellished and statement. The necklaces were mainly paired with clothes that had a squared neckline or a v-cut, this to either enhance or contrast the cut of the clothing piece. It was common to match necklaces with squared collars as the two weren’t “competing” in the same area. And speaking of collars, I’m not going to bore you with names, but Chelsea, Shawl, Notched, Sailor and Middy are all names of collars that were trendy. What these have in common is that they’re all are fairly wide. The two latter are nautical, which was a popular style at the time. For coats and jackets it was popular with fur collars matching fur cuffs and hemlines, often pretty voluminous and oversized.

The final one of the four details was the cut of the fabrics, which perhaps was the most common way of framing the neckline. One interesting thing with this detail is that it mirrors the Art déco style. With its geometric look, sharp lines and glamorous vibe – it was easy to translate the, mainly, architecture style to  fashion. Think Gatsby and 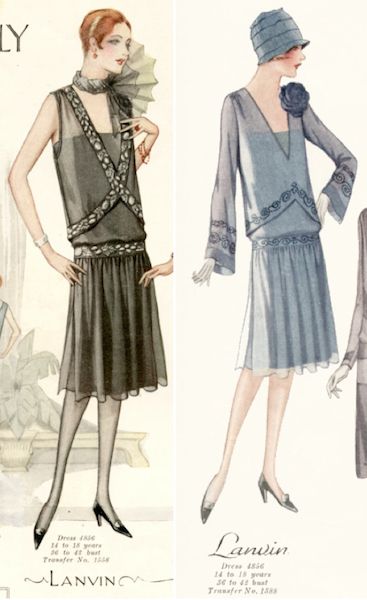 you have a pretty good idea of what it was about and how the style expressed itself. With sharp V-lines, squared necklines and layered fabrics, the cuts of the materials intensified the static design and drew focus to the décolletage. The hemlines of the neckline was often embroidered or embellished, which further centered the attention to the neck. It was also common to add a brooch.

One interesting thing to reflect over regarding the focus on the neckline is how it reflected the societal opinions at the time. The style of the dresses, as well as the accessories, were done in a way that made the chest look more flat for women. This was in line with the body ideal at the time, which was more square, boyish and sans curves. There’s a correlation, if perhaps a bit unscientific, between the political influences of the time and the fashion/body ideals. During the 1920s, with women around the world gaining the right to vote (hand in hand with the liberal vibe of the decade), women’s fashion became influenced by menswear.  The corset with its S-silhouette and enhancement of the female body was replaced with a more rectangular body ideal, one close to the men’s. The skirt length grew shorter and some women had even begun to wear pants. The fashion of women became less decorative (oh well) and more functional. Women entered the men’s world and it was reflected in the fashion. This more androgynous ideal would be further intensified in the 1960s when the 20s got its first revival, with Twiggy embodying (no pun intended) the skinny, androgynous body ideal.

Though the focus on the neckline is an interesting part of the 1920s fashion, it wouldn’t have had its effect if it weren’t for the shorter skirts and corset-free fashion that took place parallelly. The three in combination created a more boyish ideal, which unconsciously underlined the idea that women could only take place in the men’s world if they became more like them. The clothes, with their highly superficial side, became a metaphor, representing the first steps of a more equal and conscious world. What’s even more interesting is that, soon 100 years later, a woman is still considered empowered when dressing in typical menswear (hellow blazer) whilst a man is ridiculed or “too feminine” when dressed in women’s clothes. Why is the aesthetic equality on the terms of men? Don’t get me wrong, I’m immensely grateful for the progress that’s been made. Not having to wear a corset, being able to dress freely and choose what I want. But it’s an illusion that the barriers of gendered clothes are completely gone or exist without judgement. They don’t.

Folks! What are your thoughts on the neck 1920s? What’s the best part about the 1920s fashion according to you? Xx 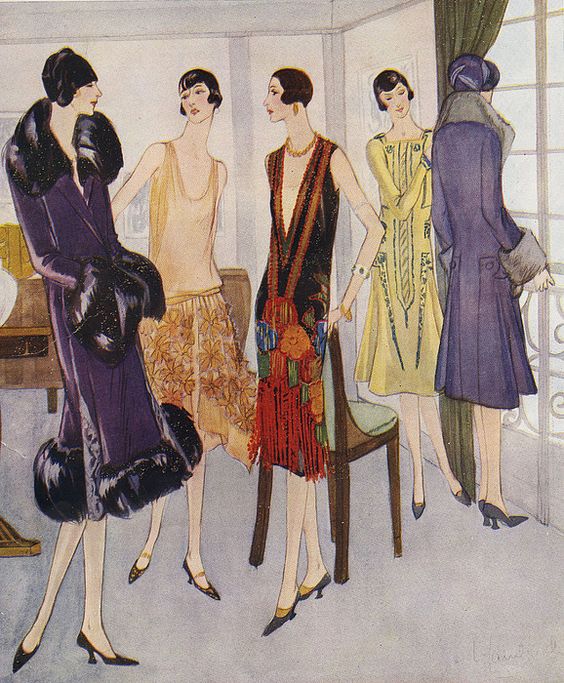