It’s time for another decade in the series of fashion history of details! This week is about the decade between 1910 – 1920, a time period that’s often forgotten when referring to the fashion decades of the 20th century. It’s naturally so, as the decade is a transition from the old fashion of corsets, layered dresses, exaggerated accesories – to a decade of knee-long skirts, sequins and flapper dresses. One of the most important detail, of the 1910s, is the belt. Here’s why: 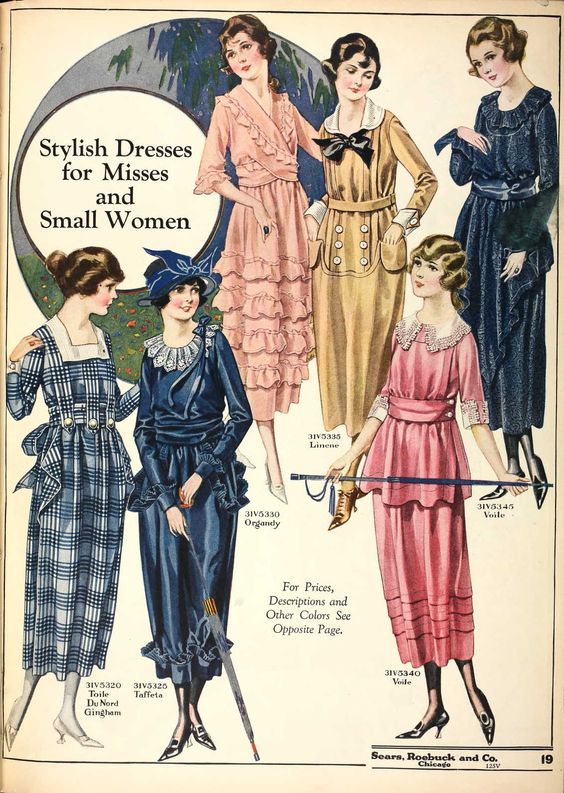 Womenswear had for centuries been dominated by the use of corset (with a few years during late 18th century and early 19th century as an exception).  There are several reasons why women wore corset, one of them being that it gave a good posture and suppoerted the clothes women wore. The main reason though was for its aesthetic qualities, it helped women get the body ideal of a curvy body with a tiny waist. Corset were for most part done extremely tight, which made them immensely uncomfortable to wear. This was not strange though to the people at the time, as one’s appearance 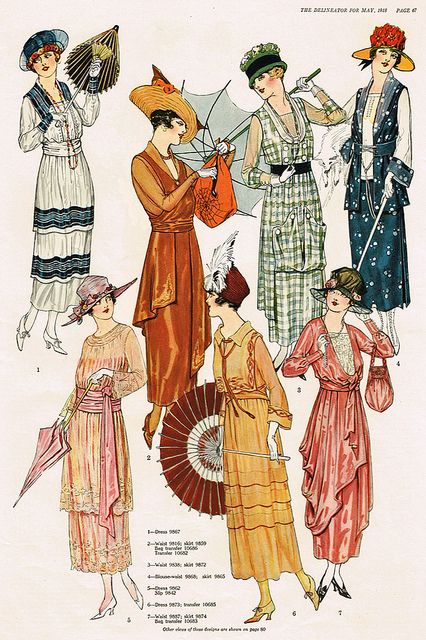 was a major part in people’s status and how they were perceived. People were willing to go through a lot of pain and questionable beauty methods to achieve the beauty ideal. Including wearing a clothing piece so tight that it could punctuate your lungs (!).

As the societal development went on, with the industrial revolution leading the modernization, clothes became more and more functional as it was what was being demanded by the new society. By the early 20th century, more and more women had ditched the most conservative way of wearing corset. Much of this happened mainly thanks to two factors; fashion designer Paul Poiret and WWI. Poiret launched a fashion for women sans corset, being all about flowy silhouettes, loose garments and a more carefree style of fashion. WWI, with the men being out in the war, required women to enter the work life and long skirts and tight corsets were anything but useful when doing heavy work. That’s when fashion began to take its final steps to ditch the old way of wearing the corset.

But as with a lot of things in the history, nothing happened dramatically over night. The step from going from a corset-fashion of an hourglass figure to a rectangular silhouette took a few years. And in between that, it was still popular to accentuate the waist, but not with a corset but with a belt. It worked as a transitional piece from the old ideals to the new (fashion) world. The belt was an item that helped creating the body ideal, of a curvy figure, but by being more casual than a corset. You could put it on yourself, take it off yourself. It could easily be loosened up, or tightened by the woman wearing it. Women could dress themselves.

The belts as we know them today are quite ecclectic. Anything goes is kind of the melody, with logotypes, belt bags and chains being more specifically trendy this year. Back during the 1910s, the belt was a fabric, matching the rest of the outfit in color and style. This specific style of belt, emerged from Paul Poiret’s fashion and his influences of the Oriental fashion. The belts were often about heavy garments in rich colors, sometimes with 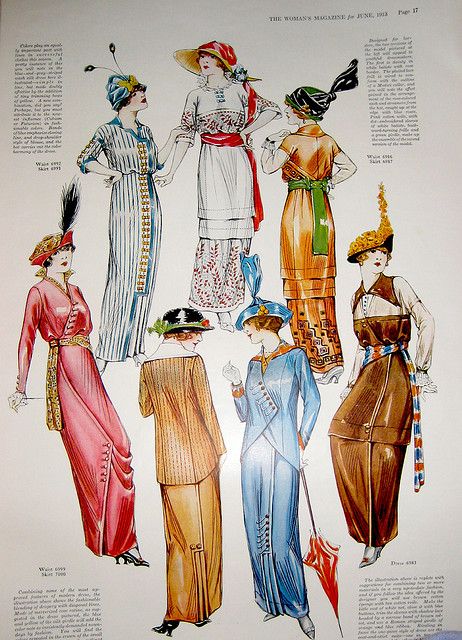 embroidery and fringe, that matched the rest of the outfit. The length of the belts were long and would often hit knee-length or even midi. This fashion was more exclusive to people who followed trends and worked well with loose jackets, skirts and colorful fabrics.

Another way of the belt was the one that was a part of the skirt/dress. Perhaps not entirely correctly to name it as a belt, but as it accentuated the waist, and was often marked in a contrasting (but matching) color – it looked like a belt. I’m just guessing now, but I’d say that this sort of style of the belt was the most traditional and conservative one as it was a subtle difference from wearing a corset. The waist was accentuated indeed, but done in a more “natural” way. The width of the belt was often quite large, but would decrease in size as the decade went one. Much alike the belts above, the colors were for most part in line with the rest of the outfit but could also be contrasted.

A third look of the belt is the one as we know it today. Just a simple piece of leather or fabric, secured in the front with some sort of metal construction. This style would be most popular for the functional fashion and outerwear. Especially of those women that went into work and needed to keep their clothes in place. This kind of belt was functional with the leather being durable and secure. It was also more secure to wear at work as it didn’t have any long fabric risking to get in the way. This modern style of the belt was also used in the daily fashion to some extent, mainly for jackets and blazers – much alike the belts we use to our coats today.

As the 1910s went on fashion, as mentioned above, became more and more functional and thereby modern. As for the story of the belts, they became more loose and closer to the hip as the decade progressed. As you know, the silhouette of the 1920s was about the rectangular look, with the hips being defined by a loose belt or as a part of the skirt/dress. The 1920s was also more liberal in its societal view, with an optimism in society after WWI. It was okey to show your legs, to cut your hair short (well kind of) and party. And this is one of the things that’s so interesting 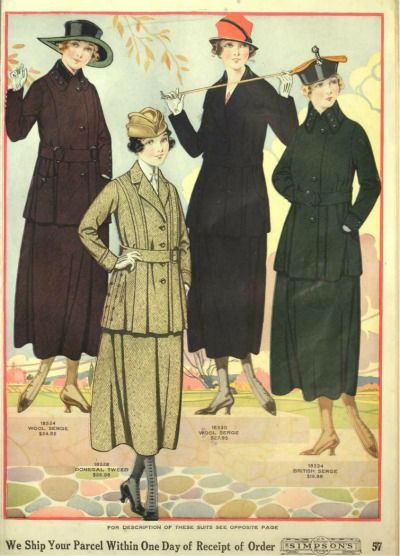 with fashion history, it’s fairly easy to detect a pattern of what the society looked like and how that was reflected in what people were wearing.

The belt was the perfect transitioning piece as it still upheld a beauty ideal but could be changed to present a new beauty ideal. By just loosening up the belt slightly, the silhouette took on a more rectangular shape. As fashion was loosening up, society was also loosening up. WWI also contributed to this, showing that women could work and that they could wear more functional clothes. This paved way for the modern fashion that was one step away from the societal pressure and one step closer to the individual. It didn’t happen at once, of course, but it was a first step. The belt would have an important role in the 1920s’ fashion as well, but it was during the 1910s that the role was shaped. Belts have since then been an important accessory in fashion, perhaps being more used for its aesthetic qualities rather than its practical functions. Nonetheless, the belt in the 1910s was a way out of the corset fashion and that folks, is pretty cool.

Folks! What are your thoughts on the belt of the 1910s? Let’s chat in the comments! Xx 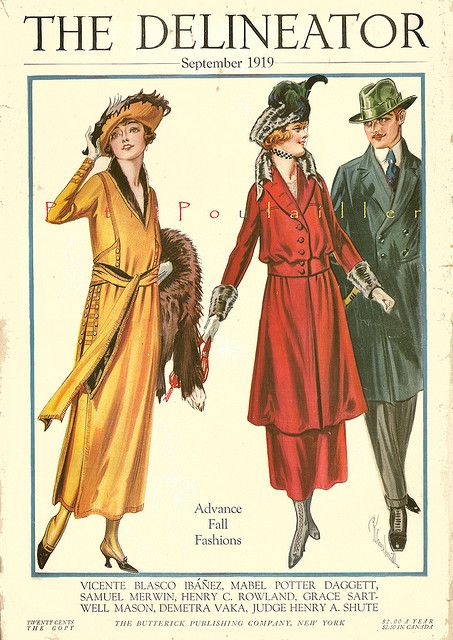