Today’s post is a bit different as it won’t be about you, but about me (sorry about that). It will be about me and my best friend coconut oil. It’s a fun one, so bear with me! Folks? Coconut oil for the eyebrows is true!

I’m not good at committing myself to changes aka new routines, perhaps because my life is hectic as it is or I just tend to forget way more than I should. But if there’s one thing I’m specific about when it comes to my beauty life, it’s my eyebrows. They’re not Cara Delevingne or Audrey Hepburn, but they’re doing quite alright. As I’m guilty of existing during the wave of thin eyebrows, my eyebrows have been thinner than thinnest. (It should be somewhat a crime to pluck the eyebrows to non-existence). They have been growing back more than fine, though not as fine as I’d want them however. As I’m a huge fan of coconut oil (extra virgin organic coconut oil that is) I thought it was my turn to combine my two loves, coconut oil and my eyebrows. Here’s the thing:

Coconut oil is somewhat famous for its many health benefits. Everything from serving as a moisturizer, to oil pulling, highlighter and soothing for wounds (find a long list here). It’s also known for stimulating hair growth, which is ultimate when it comes to eyebrows. But as with all beauty trends and cures, one doesn’t really know until you’ve tried it yourself. Even though it works for everyone else, it will remain pointless if it doesn’t work for you (being all selfish and everything).

So I decided to give it a try, apply coconut oil on my eyebrows every day for 30 days. This with the intention to get the tiny gaps in my eyebrows filled in a natural way to a low cost. And do it in an easy and smooth way, aka not committing myself to eyebrow improvement for hours a week. So here’s how I did it:

And while we’re at it, I can just say that it’s easy to do this routine. It’s kind of foolproof. Literally having a visible jar of coconut oil in the bathroom is a great reminder. And as it’s only to be done once a day and it takes 10 seconds to do both of the eyebrows, it’s not a time issue at all. Like, no one is that stressed to not have time for it.

Here’s what my eyebrow looked like before, it’s okey in thickness (would love them thicker though) but it has a few gaps here and there. Some spots are more thin than others and you can see them below to the right. And please! Do note that I have no makeup or done anything to my eyebrows in the before or after picture. Only coconut oil after 30 days! And yes, I know that some might not see what I’m complaining about in the first place, but I stare at these every. single. day. I see their flaws, where I’d like improvement. Where I want Delevingne’s magic to pop up! 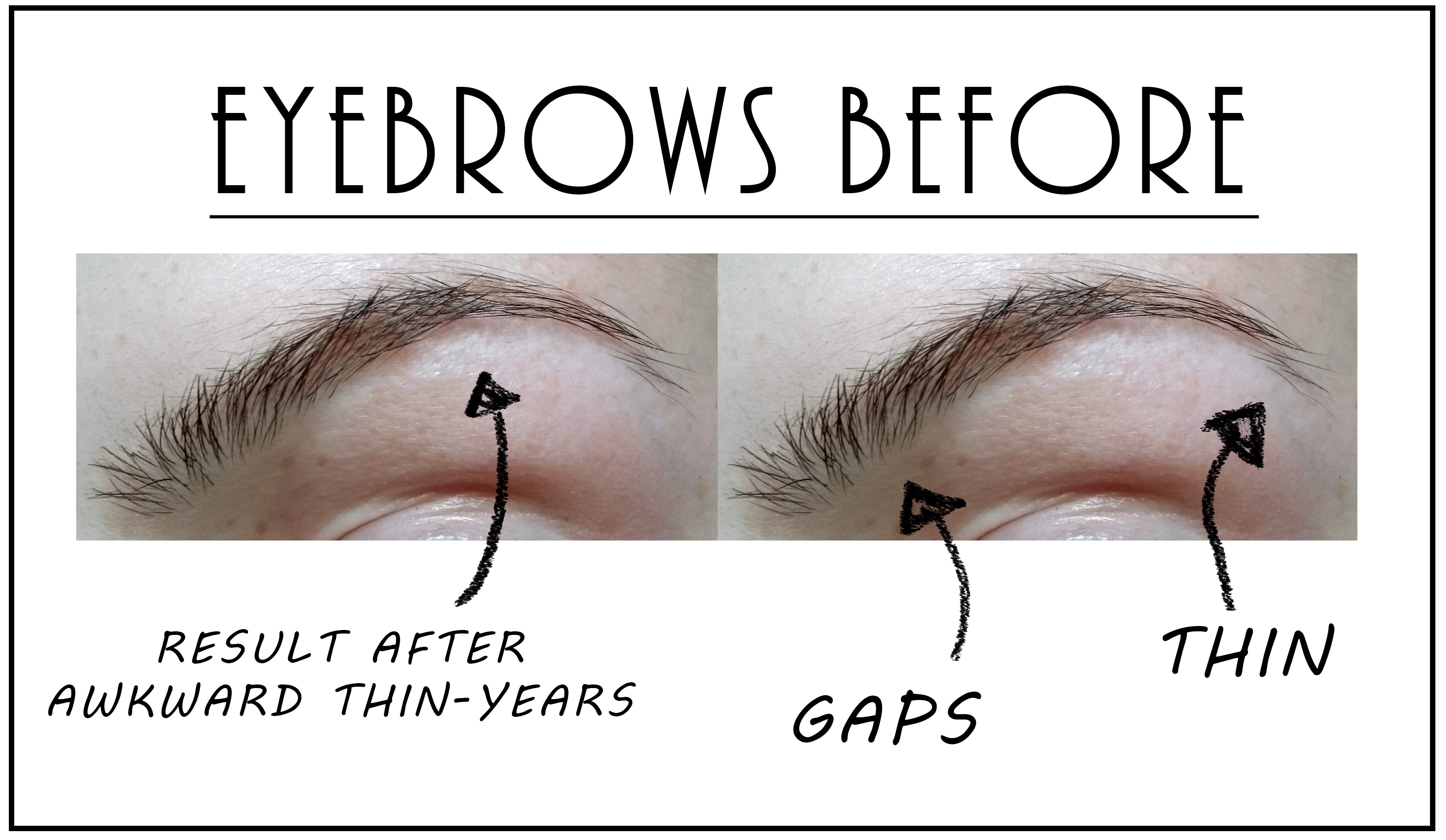 And here’s the result after 30 days: 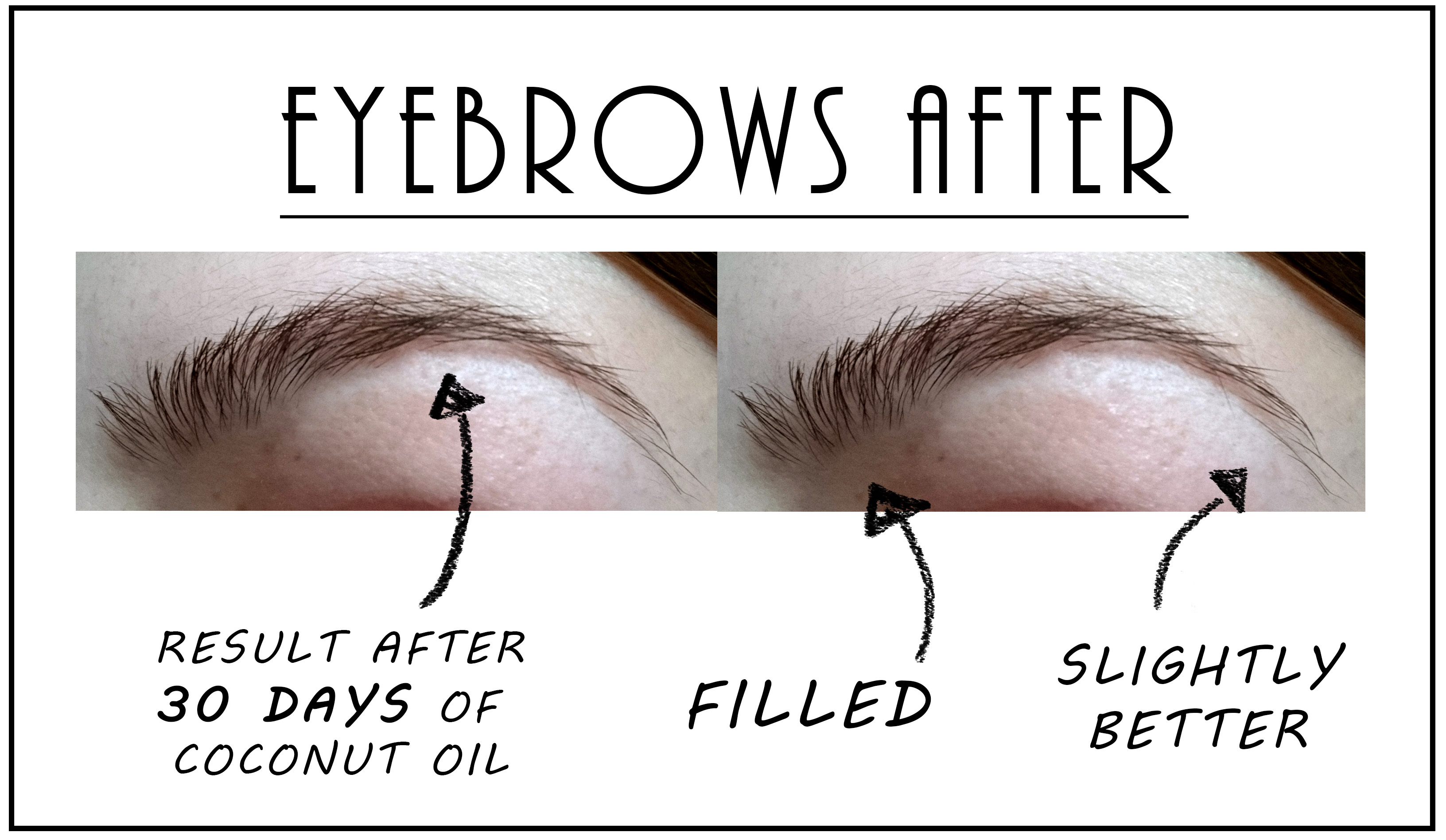 As you can see, IT DID HAPPEN. THE MAGIC HAPPENED. It’s an improvement, a small improvement but still an improvement. The crucial gap (by the start of the eyebrow) is filled! Well, of course it can do better (why didn’t Audrey Hepburn happen?!)  and I’m still not completely happy with the bow and the end of the brow. But, it’s on its way. The improvement is happening. And 30 days might not be long enough (it hasn’t been hair there for years), so I’ll probably continue this for awhile. Perhaps it’s one of those things like moisturizing the face, it should be done daily. And for a good pair of eyebrows, I’m okey to give them their daily love as well.

The Pros and Cons

So here are some final, more structured thoughts on the pros and cons:

So that’s a wrap on my love for my eyebrows and coconut oil, and especially doing this in combination. It’s easy, cheap and natural,  which is all I ask (quite a lot though) of a new routine that’ll help my beauty life. And as I’ll continue doing this, who knows, I might need to do another update post if the magic keeps on happening!

Folks, what are your thoughts? Coconut oil for eyebrows? Let’s chat in the comments! 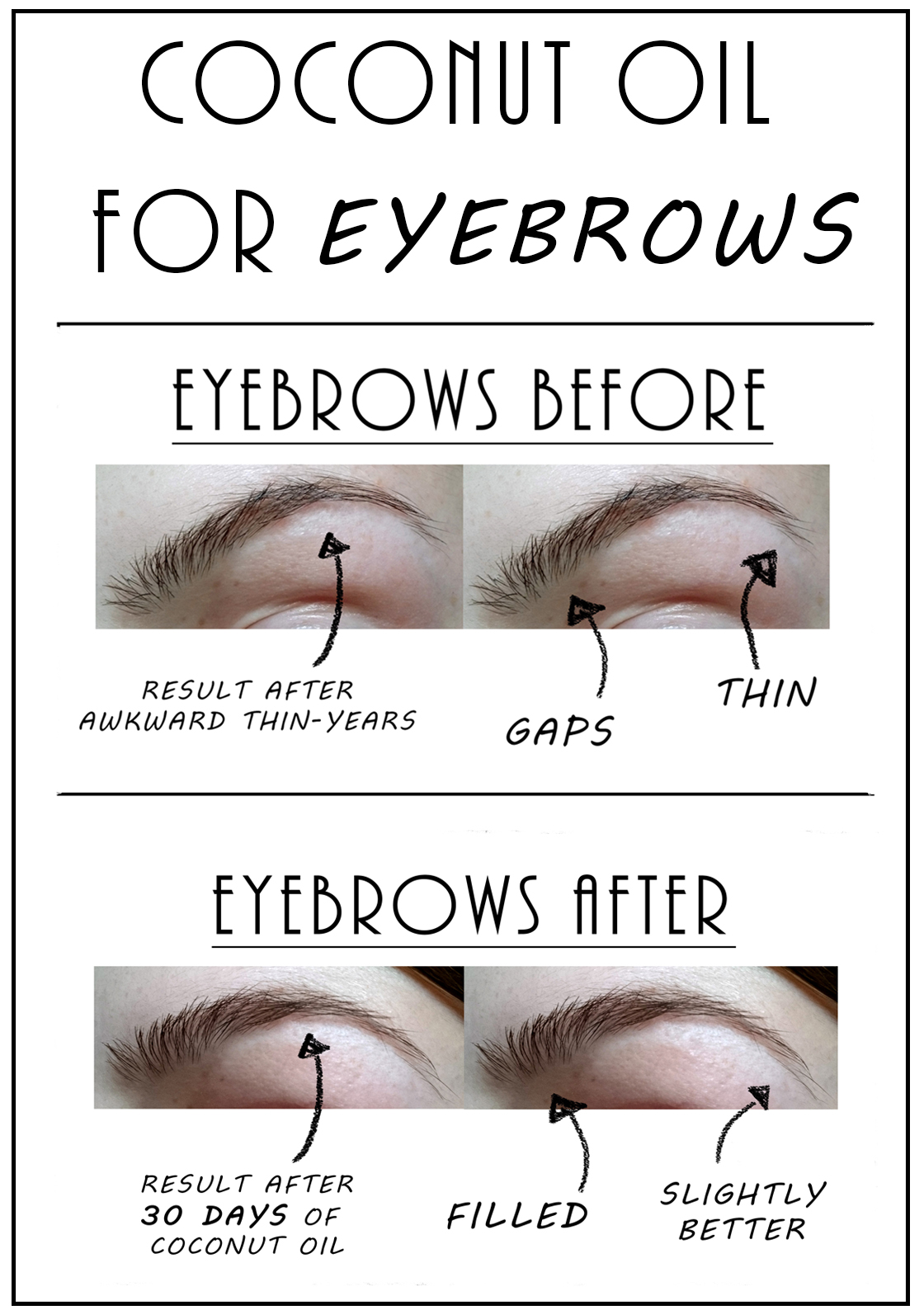 96 thoughts on “Coconut Oil For Eyebrows”