Keeping the swinging vibe from the 1960s and transforming it to the disco life of the 70s is pretty much was this decade was about. From Manhattan and Studio 54 to jumpsuits and the wrap dress of Diane Von Furstenberg. Here’s the fashion history: 1970-1980: 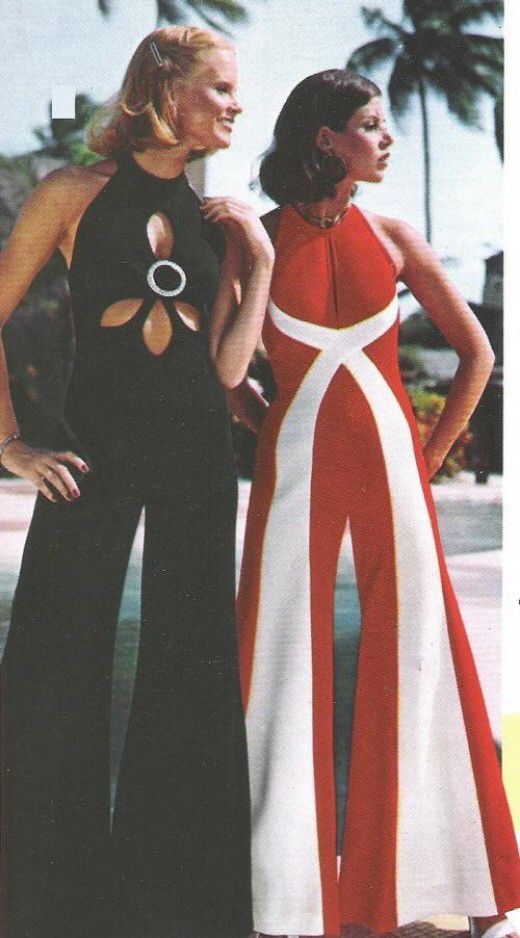 As the world kept developing and progressing, the 1970s would become another decade where society would change. The 1970s would be defined by the movements. For women’s rights, equality for people of color as well as justice and acceptance of the LGBT community. Different movements would raise questions of global warming and stress the matter of sustainable development. Other movements in specific brought up questions of gender identity, discussed alternative ways of life and would very much indeed define the style of the decade.

The cultural life bloomed with more and more people of color being included in popular culture. TV-shows such as Charlie’s Angels, All In Family and Hawaii Five – O (only to mention some) would set the tone for Hollywood. Some iconic people from the decade in the cultural context includes icons such as Andy Warhol, Bianca Jagger, Grace Jones, Liza Minnelli, Davie Bowie and more. Studio 54 would be the center of the elite, with a mix of actors, models, designers and artists.

As with all decades, different styles would define and separate the fashion. Though to be noted is that the styles shared the same foundation. The overall silhouette was an upside down Y with narrow tops and wide pants, maxi skirts and 70s jeans (yup, you know it). This 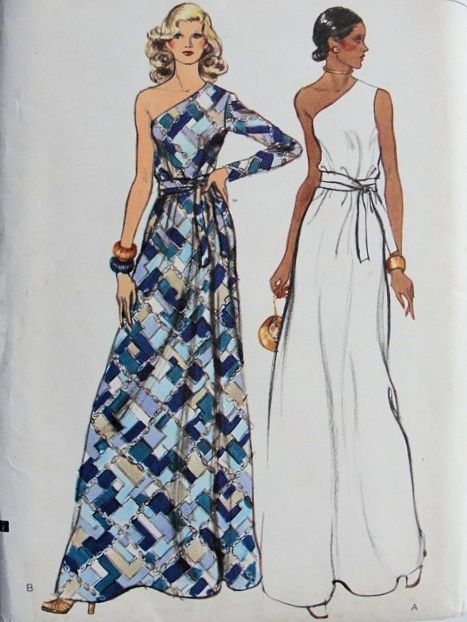 silhouette worked for the hippie life as well as the disco of life akaStudio 54. The length of the skirts and dresses also went as short as possible with hotpants, mini skirts and short dresses being popular clothing styles to go with the platform boots.

The liberal style of the hippies would translate into loose clothing pieces such as tunics, maxi dresses, frills and sheer fabrics. The new interest for sustainable development, and caring for earth, was visible in the earthly shades. The hippie life would also promote a rather unisex fashion  with women and men dressing alike in terms of shirts, denim, print, accessories and colors. When we talk about bohemian fashion today, it’s a rather simplified version of the 1970s style with more prints, details, layers and exaggerating styles being the matter of the past.

The opposite of the down to earth hippie life would be the disco life. The disco life was the glam version for the 1970s with sequins, glitter, metallic, white and glamorous jumpsuits being in focus. Alike the hippie style, the silhouette 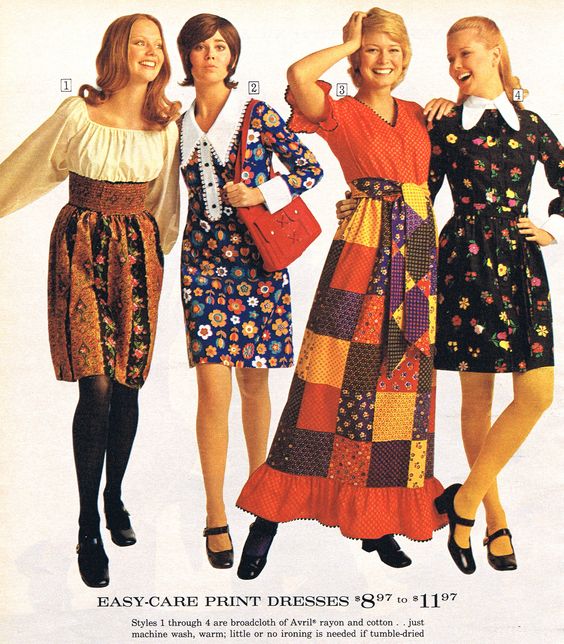 was an upside down Y, with wide legged pants. Ruffles, flowy shapes and statement boots would be key features. More and more skin was shown, earlier it had been in the context of legs, but crop tops and dresses/jumpsuits with cut out details emerged.

The everyday style of the 1970s also went for the same flowy life as the other styles. The 1970s was the decade where denim would be accepted as an everyday item for both genders. Shirts and a sweater to go with it was common. Printed tops and pants for both men and women were popular. A lot of animal prints but also motifs of nature, paisley and post-modern art patterns.

As mentioned, womenswear and menswear were pretty similar as they more or less shared prints, colors, clothes and silhouettes. This was, of course, a product of the unisex thoughts in society and the fight for equality. Unlike previous decades where women tried to reach the level of men, the 1970s feels like the first time where men met “typical” womenswear and went more feminine with popping colors, prints and flowy garments.

The jumpsuit, the maxi dress and the wrap dress are only some of the iconic pieces of this decade.  All the mentioned clothes underlined a more liberal fashion that was both comfy and a matter of personal preferences rather thansocietal expectations of clothes. The jumpsuit would become a statement of equality with both men and women working the fabric. It worked well for the daily life in fun 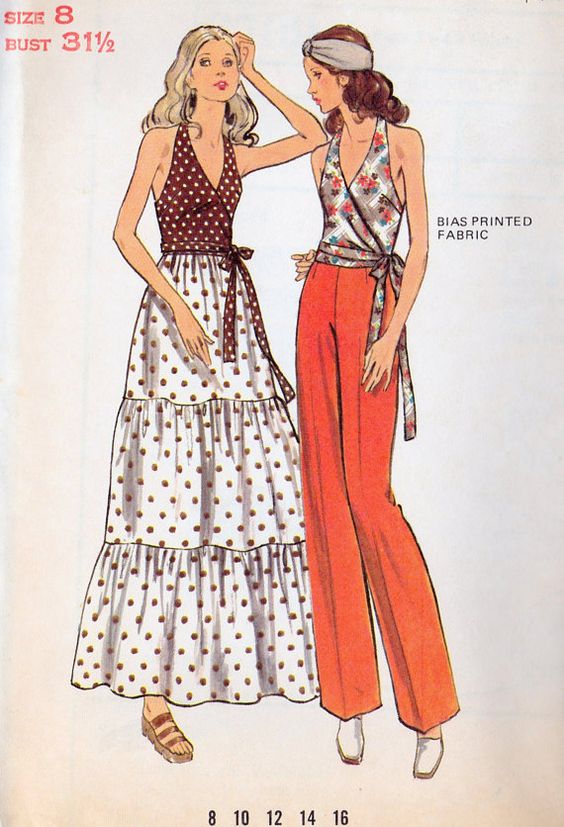 prints and popping colors but also for the glam disco life with sequins and stylish cuts. The pants of the jumpsuit were wide and needed the platform heels and boots to make them justice.

The maxi dresses (as well as skirts), flowy blouses and vests were all items of the hippie movement. They often came in earthly shades as brown, mustard yellow and faded green, orange and pink. The print was commonly floral (flower power, hello) and also paisley went for the popular market. The accessories were headbands, long necklaces, the peace sign, oversized sunnies and long and thin scarves.

Denim in the version of jeans and in the style of the 1970s was popular if not an it-item.

Men and women wore them with shirts in prints and a belt by the hips. The 70s style was heavily flared and it’s no wonder that 70s jeans is the name for it. The shirts were unbuttoned and formed a v-shape. That same v-shape was a popular style for tops ofjumpsuits too, leaving no place for a bra. Speaking of bras, the 1970s were a decade where fashion went braless. A bra didn’t work well with the low neckline of the tops, nor the deep back. Neither was it in line with the movement of the hippies and the ideas of living freely and not under the ruling of clothes.

The beauty of the 70s should be renamed to the lashes of the 70s because this decade was all about the eyes. Longer lasher than ever (for both upper and lower lines) which gave a doll effect. The makeup was in that way similar to the 60s as the eyes were kept in focus. Bright shadows as blue, white, green, purple  and champagne were also trendy to do for an eye look. Unlike today’s eye makeup, the 1970s eyeshadows were mainly about one color and not shadowing the eyes. Just a 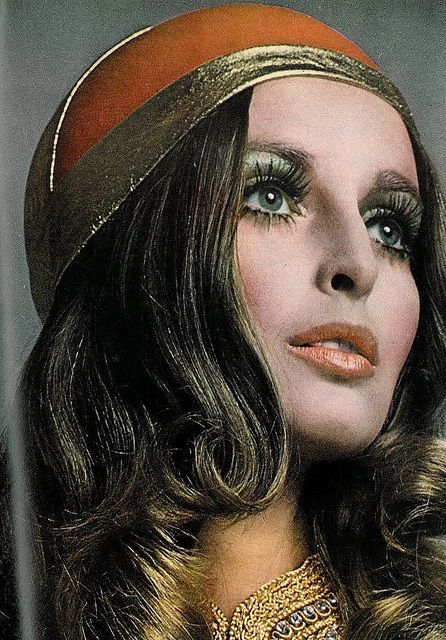 stroke of purple over the eyelids and up towards the brows + the statement lashes and you were good to go. The eyeliner was for most part kept subtle and sometimes more statement. The lips were bright and peachy, similar to the 60s.

As for the hair, the 1970s would be the decade of more or less natural hair. Women should have their hair in midpart and let it grow long and freely. Often done in loosewaves or with curls á la Farrah Fawcett. Natural curls as in afro hair was also popular to embrace (like hello Diana Ross). Showing one’s natural hair was a reflection of the earthly and free vibes that defined society and fashion.

Diane Von Furstenberg might not have been the first with a wrap dress but she was surely the one that would take it to new heights. She made the wrap dress a matter of comfort, function and style. The wrap dress fitted the liberal fashion perfectly as it shaped itself after the body and didn’t defy body limits as in previous decades. It was flattering 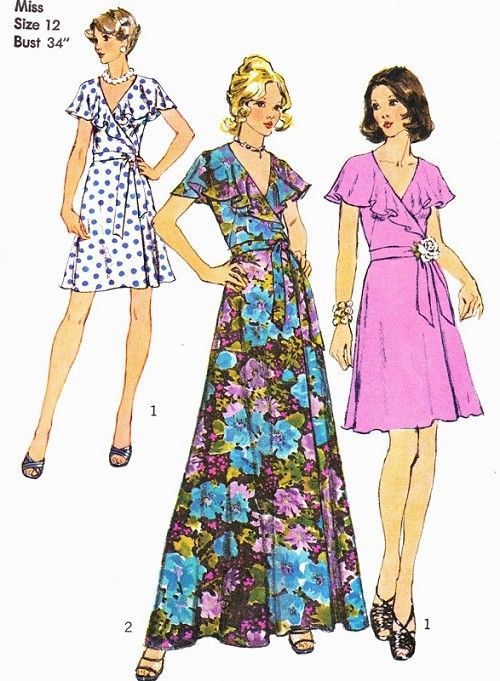 with the slight enhancement of the waist and it was easy to wear as it only required a knot/bow. The dresses often came in vibrant colors and prints. As I’ve stated in earlier posts, a wrap dress being produced in the 1970s and forward is often hard to date as the dress has more or less remained intact since. It’s a true wardrobe staple!

The 1970s had already played with oversized dimension (as in wide legged pants) so the transition to the 1980s would come natural. As the decade went on, the silhouette slightly turned from an upside down Y to an accurate Y. The shoulders would grow in size, the pants would go more narrow. Even though the hippie style wouldn’t continue in the same way to the 1980s, the disco life would do so. Or at least parts of it as the 1980s remains the nr one decade of animal prints, something that began in the 70s.

The pantsuit and powersuit would elevate in the later decade and steady its position as a clothing piece of and for equality. And who would define the position if not Chanel and the legend himself, Karl Lagerfeld, leading the brand? The powerful statement would be nothing though without the unisex fashion the 1970s promoted. The unisex fashion that developed alongside the fight for equality and justice for women, people of color and the LGBT community. If the people of the 70s only knew that we are still marching globally to protest against the injustice. This time around not in similar outfits but in pink hats, because pink is power you know.

Folks! This was the fashion history: 1970-1980. From Studio 54 and pop culture this week to animal prints, powersuits, rock and the oversized life of the 1980s next week. As the 1980s is the trend of the year, I’m sure that post will be a blast to do! Xx 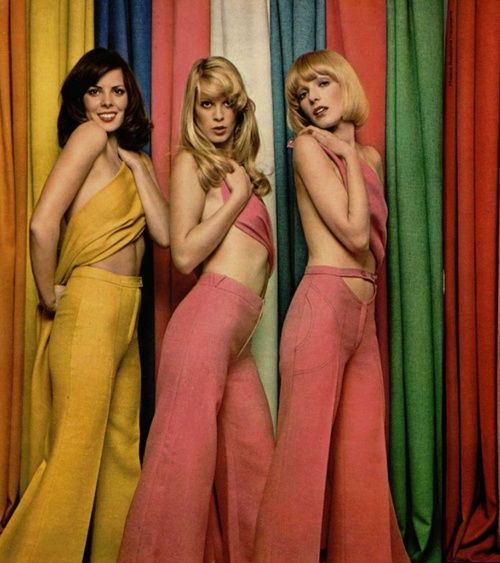