I don’t get to use the term swinging 60s until next week really, but I’m pretty sure the swinging life started in the 1950s. Youth culture, housewives, Hollywood icons and a fashion balancing between elegance and energy. Here’s the fashion history: 1950-1960: 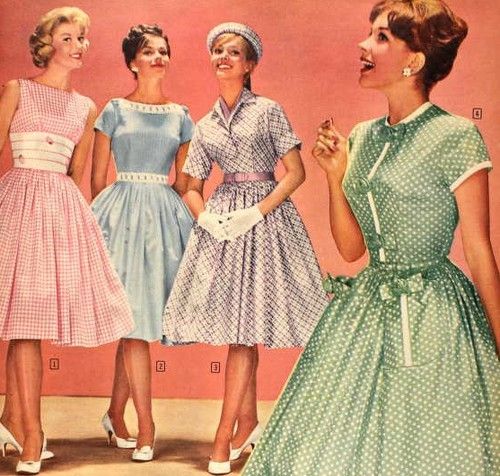 I often think of the 1950s as a doll house. Where the focus is centered to having the perfect home and a happy family. Where the interior is matching the clothes of the family, the furnitures of the house are all the latest trends and the surface is polished to perfection. You know?

The 1950s were a decade of youths against adults.The growing youth culture would become the first distinct decade where teenagers differed from their parents in the way they dressed but also lived. During the 1950s the teenage culture would be inspired by Hollywood stars and their work: music or movies. School cliques as in gresaers, jocks and preppy are strongly associated with the decade. Including teenage things like high school prom, drive in restaurants and the American high school dream. (Think Grease).

The decade would also be a development for technology, iconify the idea of a housewife and embed every person’s (man’s) possibility to self-actualization. The car industry bloomed and technology peaked with television for the home. Even though the 1950s, with a retroperspective, feels like quite the youthful and joyful decade – the years were defined by the Cold War as well as reconstruction after WWII and also the Civil Rights Movements. Topics that contrasted the handbooks in how to be a perfect housewife (yup, those existed).

The differing of youths and adults would reflect in how people dresses. The core would be the same however, but with youths going for simpler details and more functioanl. The so called greasers would approach a more edgy style with denim, leather jackets and – of course – greasy hair. Style icons were Elvis Presley and James Dean. The people that still kept it more or less conservative 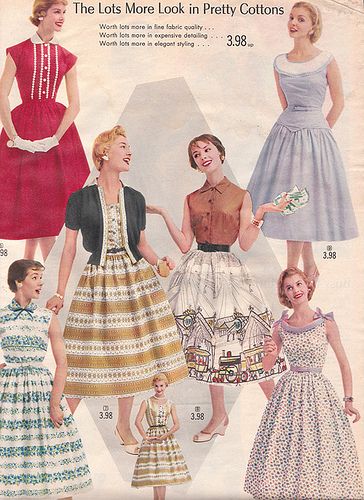 would have Grace Kelly and Audrey Hepburn as style icons. If one went for a more pinup style, Marilyn Monroe and Elizabeth Taylor would be more defining.

The hourglass silhouette was defined by Dior and The New Look. The bust was pointy, the waist tiny and the hips large. This was often enhanced with a corset or clothes that defined and hid the body in the right places. The illusion of  large hips was, of course, helped by the voluminous skirts and dresses that gave the effect of an even thinner waist. This iconic and lively look of the 1950s has it similarities to the mid part of the 19th century, where women looked like porcelain dolls. The latter is partly relating to the women of the 1950s where they looked polished and perfected. – just like how their homes should be. A matching doll house that is.

Parallelly to the feminine style, a more boyish look was developed with Audrey Hepburn being a popular icon. The look mainly consisted of cigarette/capri pants with a neat jumper and a pair of flats. Functional and minimalistic. 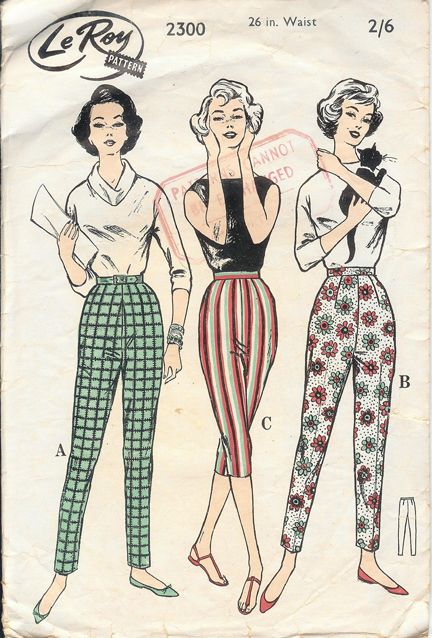 The color scale for women was bright, sweet and sugary. Pastels in all shades possible, a lot of gingham and floral patterns. Pearls for the neck, gloves for the hands and scarves for the hair. Denim became an everyday item and red was a common statement for makeup as well as clothes (especially for the pinups). For the boyish look, the colors were similar to men’s with brown, camel, grey and black.

Several looks of the 1950s remains characteristic to this day. The tight cigarette pants paired with a sleeveless blouse is one iconic outfit. The twin sets with same colored top and cardigan (often with a pearl necklace) would be a popular go to (see below by Beauty). The skirts were fluffy and matched with a blouse or 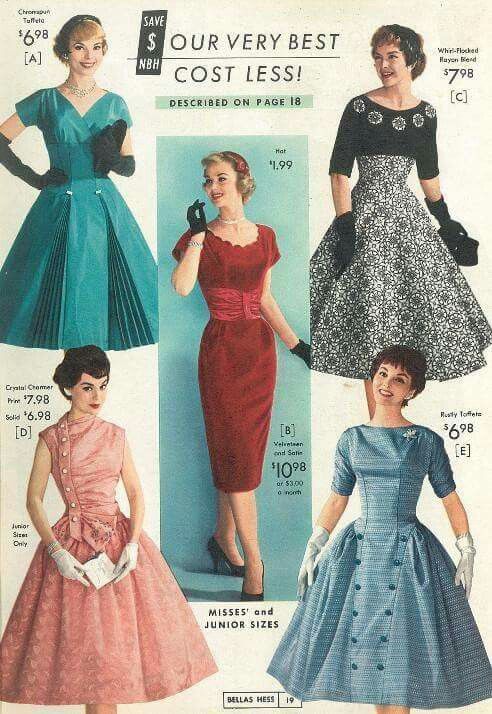 jumper. The collars and necklines of the blouses and dresses were a cute detail (see here). Bows were a popular choice of detail, often added to necklines.

Sunnies were an accessory that grew in popularity, often with pointy frames and matching to the rest of the outfit. The skirt length was right below the knee which was a favorable length for the effect of the skirt. The jackets and coats of the 1950s were important to the fashion, an importance that remains today. Or how about leather jackets and college jackets? The coats of the decade are insanely pretty with sack coats (with a silhouette like an oval shape). Even more popular were the sack dresses by Hubert de Givenchy that became more popular towards the end of the decade.

The beauty of the 1950s is more or less a more natural version of the 1940s beauty. The eyebrows were naturally thick with an arch in the center. The winged eyeliner got its full love in the decade, often done with the classic red lip. Eyeshadow could be white or bright blue.  I often think of apples (lol) whenever I see a makeup look from the 1950s. The skin is porcelain, the cheeks perfectly blushy, the lips are the 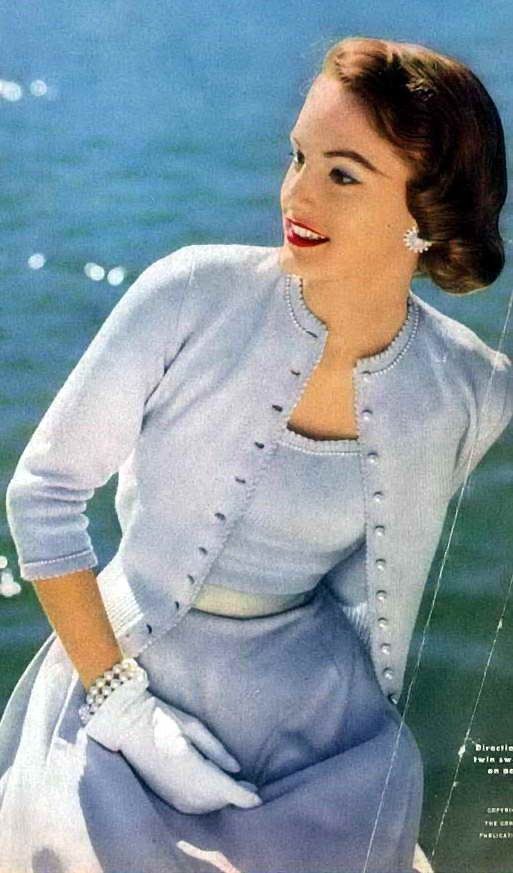 perfect shade of red and the overall makeup look is polished to its core.

The hair was wavy and curly, often framing the face hanging down from the sides. Another hair look was curly with the curls brushed away from the face, giving the face its full spotlight and an ladylike appearance. Ribbons were also popular to tie ponytails and braids.

Even though the queen of fashion, Mademoiselle Chanel, made her big comeback during this decade (she despised Dior’s silhouette and clothes that stopped women from mobility and a functional life), this decade belongs to Hubert de Givenchy. The french designer got his big breakthrough during the 1950s with his new silhouettes, design and simplified glamour. He launched the sack dress, which was a major success, and stood behind several of Audrey Hepburn’s most iconic looks (Roman Holiday, Sabrina and Breakfast at Tiffany’s in the 60s). The two of them were close friends and Hepburn was his muse. Givenchy’s style was simple but glamorous with a focus on the fabric/silhouette rather than details, which was a nice contrast to the current trends.

The years after the mid 1950s, fashion began to go more functional. Chanel was back in fashion and embraced a more straight silhouette. So did Pierre Cardin (as seen below, just look at the coats – hello gorgeous!). Christian Dior passed away in 1957 and his successor, YSL, launched the trapeze silhouette (A-line) in 1958 with his Trapeze Line for Dior. The A-silhouette would define and enable a lot of the fashion in the 1960s, from the mini skirts to the iconic shift dresses. The fashion of the late 50s went more simplified and functional but still kept the core of fun colors and patterns. The latter would be intensified and underlined in the 1960s – and with its full force be a part of the swinging 60s.

And that’s a wrap on the fashion history: 1950-1960. Next week will be about London, the final liberalisation for womenswear and space! 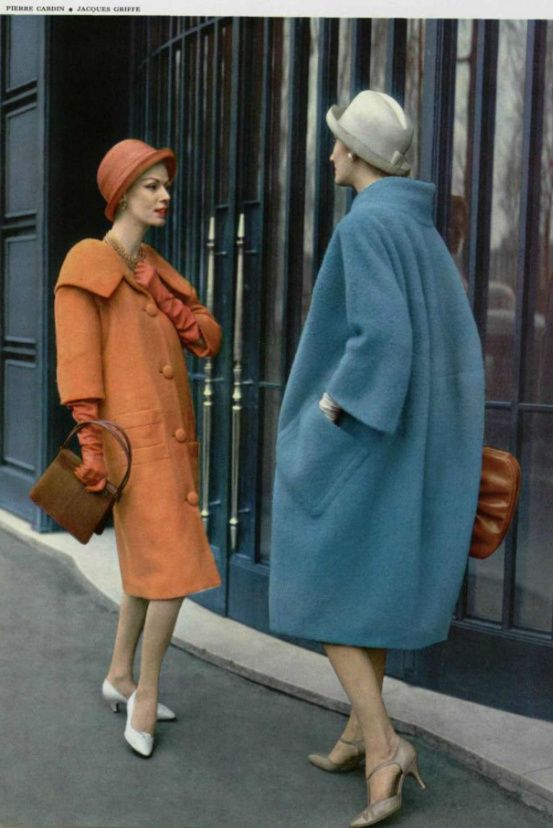