The 1940s are a decade of fashion lows and highs. From the product ransons of the war to the revival of couture – the decade surely lived through its changes. The 1940s fashion began in a world of crisis and ended with the new bloom of fashion. From fabric ransons to Dior’s 15 layers of underskirts: This is fashion history: 1940 – 1950!

The 1940s began with WWII dominating (obviously) the world situation. People had to adopt their life after the current situation with ransons of food, fabric and luxury products. As with WWI, women overtook the men’s work and dressed accordingly to the new tasks. The fashion from the 1930s, of not looking too rich, stayed as people showed respect to the war. The focus in society shifted from the everyday life to survival and fighting WWII. When the war ended, society and fashion began to slowly recover. Fashion was relaunched with Dior, the movie and music industry expanded and people faced a new type of life.

The 1940s style can be divided into two categories. The first half was practical, masculine and a rougher version of the 1930s fashion. The latter half was luxurious, with a clear focus on elegance. The early 1940s was an extension of the past decade, but with a reality check. The length of the skirts and dresses hit right above the knee due to fabric ransons. The shoulders 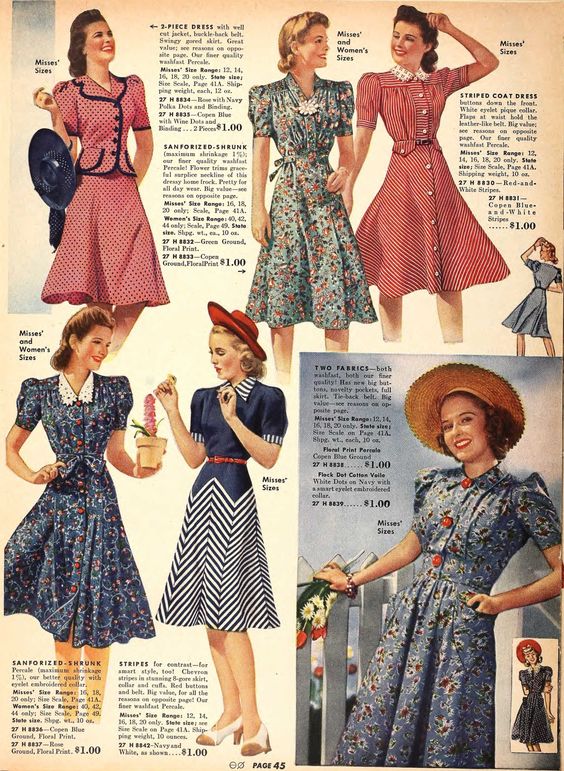 went a bit oversized, similar to the men’s. The waist was slightly defined with a simple belt. The hat was still an important accessory and print was popular for dresses and blouses. Similar to the 1930s, the details were kept simple with a focus on buttons, collars and perhaps a bow or two.

The overall silhouette was rather slim and long. Women looked elegant with their knee-long skirts and heels that gave a longer impression. As they often worked the hats too and coats or trench coats – they embodied sophisticated elegance. Even though the fashion had a masculine touch, it was still done with refinement through the flow of the fabric, the makeup look and the slightly defined waist.

For the latter part, Dior’s style vision for women emerged and he brought back the joy of fashion again. With his collection The New Look in 1947 he brought back the focus on the female shape with corsets, heavy skirts and puffy blouses. Dior’s idea of fashion was similar to the one of the early 1900s, where fashion was more of a constellation than practical. Fashion was supposed to be pretty and not functional. More on him below!

Dresses, skirts and blouses were three of the most popular go-to pieces. Women’s dresses hit knee-length, had defined shoulders and waists. They were decorated with 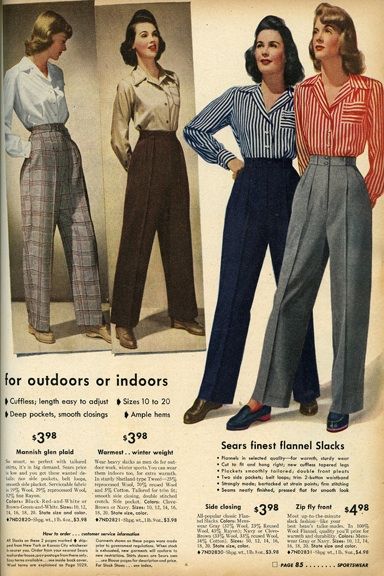 buttons and pockets (inspired from military clothes). They were common in floral prints, but gingham, dots and neutral colors were popular as well. Even though it was a restriction on fabrics, the skirts and dresses of the 1940s were quite flowy. Something that added to the femininity and balanced the strict lines of the military fashion.

Pants became a clothing piece to count on and was often worn with blouses or defined jumpers, often knitted. The blouses had a similar style to the men’s, commonly in bright colors and sometimes with a matching blazer. With matching pants, blazers and blouses, women embraced a masculine fashion. Clothes that were more functional and suitable for work. As with the 1930s, movie stars such as Ingrid Bergman kept the inspiration level high and pulled of the 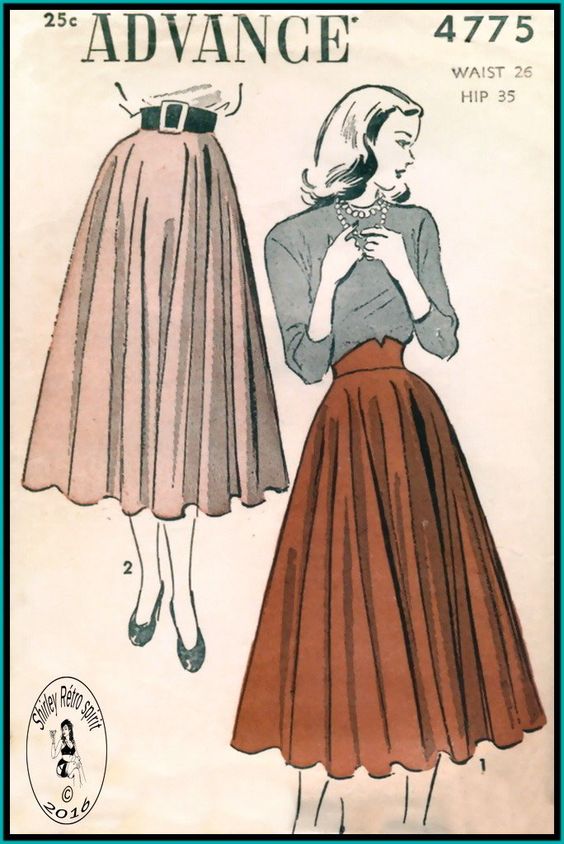 Towards the end of the decade all details of the 1940s were intensified. The skirts were wider and heavier, the waist even thinner and the shoulders wider. This was Dior’s fashion, and a fashion that, according to many, brought back femininity into fashion again. (Just compare the looks to the right and the ones above in floral!)

Makeup became acceptable and the red lip was the makeup star of the decade. The beauty look consisted of relatively plucked eyebrows, long lashes, a winged liner and perfect skin. 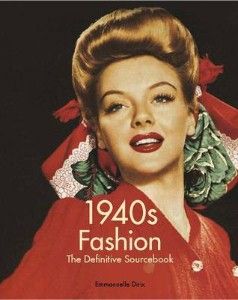 The ideal was dark brown hair. It was longer than before and often curly and done in a hairdo. It was popular to take the fringe and curl it backwards to a loop (making sense, see left). The beauty look gave a quite perfected impression with done hair and porcelain skin.

The New Look, and Christian Dior behind it, is undoubtedly the fashion star of this decade. With his launching of The New Look in 1947, he rewrote the game of fashion. Gone was the days of restricted war fashion and here was the celebration of couture, luxury and the sculpturing of women’s bodies. Dior was tired of the simplified fashion that had been dominating fashion since the 1930s. He withdrew inspiration from La Belle Epoque and re-launched the hourglass-silhouette. To achieve the right look, it’s said that one single look could consist of 15 skirts to get the right volume. This, with precise and refined couture skills, he would set the tone 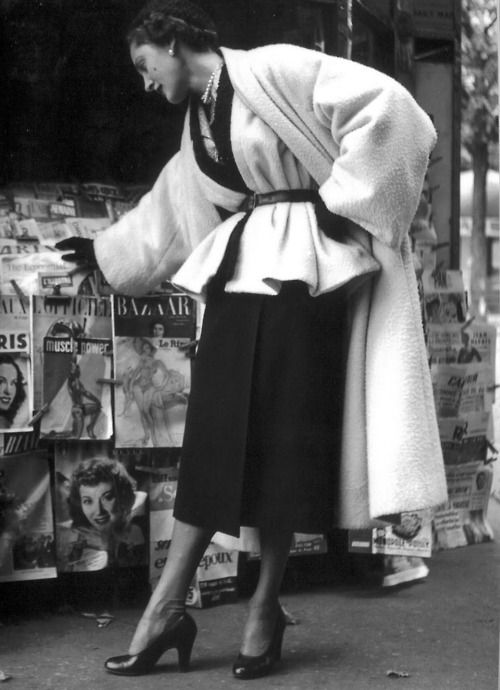 for the fashion of the 1950s. Thin waists, voluminous skirts and femininity in focus. He re-established Paris as the leading capital of the fashion world – something he did with success. See more of the collection below!

Dior stood for the transition to the 1950s. His collection was a game-changer on a fashion, societal, historical and even economical level. The defined waist, the elegance, the luxury and the refined surface would all underline the petite fashion of the 1950s. The focus on women’s role of fashion, housewife and be dressed accordingly, would be stressed through the fashion that yet again emphasized women’s appearance. Corsets were back, the woman’s body in full focus and fashion as a product of consumption. Some thought this was a feminist backlash and others welcomed the old fashion back. The New Look can thereby be interpreted as an old one –  Literally and metaphorically.

So that’s the summary of the fashion history: 1940 – 1950. Next week there’ll be the ideals of the 1950s housewives, the youth culture revolting against parents and Hollywood stars going influential!